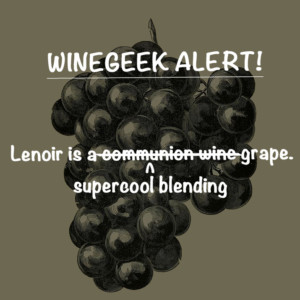 I’ve been getting a lot of questions about our Lenoir Grenache blend, so I had to sit down and put some thought into how my taste buds led me to pair this Texas grown varietal with a classic old favorite.

History of the Lenoir Grape

Also known as Black Spanish or Jacquez, the Lenoir grape was used in southern France beginning in the mid-1800s, even though it is of American heritage. Yes, Black Jack (my new pet name for my new friend) helped to save the French wine industry after thousands of plantings of its keenly phylloxera-resistant rootstock helped to quell the plague that ravaged French vineyards. It is a red-fleshed grape popular in Texas and one of the few varietals that actually bleeds red juice (more on juice color later).

Lenoir is becoming more popular among vineyards and wineries in the Texas Hill Country, the Rio Grande Valley, and in North Texas where Pierce’s Disease is a constant worry with vinifera (European or east Asian species of grape vine that are considered “wine bearing”). Originally, Lenoir was used as a wine at Communion and was one of Texas’ most planted varietals.

This grape has historically been used in Texas port-style wines and as a blending varietal due to its robust aroma and dark color. Its taste is different from European varieties but does not have the Concord-like notes of other old-line American hybrid grape varieties. Lenoir is gaining popularity among wine enthusiasts who are looking for new tastes and locally sourced American products.

Character of the Lenoir Grape

Lenoir has the character of fresh plums – round, ripe fruit – but like a plum, it is unbalanced. Its nose is bigger than its mouth. It does not have the snap of an apple or the acid quality of a raspberry or grape; however, it has beautiful dark color. Some winemakers blend it with Ruby Cabernet to make red table wine, but I feel this is too vegetal. I wanted to create something that would add balance and weight to the plum character and this is where Grenache comes in.

Grenache, when treated properly, yields a big, dark voluptuous wine with an amazing backbone of acid. Grenache has the structure and the weight that Lenoir lacks, and the two – when blended – created something richer in style than I could have ever imagined. The marriage of these two grapes has produced a glass out of North Texas that rivals the King of Wines…or at the least sits between the King and Queen of Wines, Barolo and Barbaresco.

When I tasted this, I thought, “Holy crap! Billy made a baby Barolo.” You may not believe it, but you’ll have to come to the winery to find out for yourself. I’m not really arrogant enough to say it’s a Barolo…but it’s a Barolo.

About the Label:  4R’s Lenoir/Grenache label was cleverly named and designed by 4R’s co-owner Chris Roper. Wooden artwork, also crafted by Chris Roper, hangs in the tasting room at 4R Ranch and is made from forty plus year old fencing and barn wood taken from the property.

Please let me know what you think of this blend by commenting below!